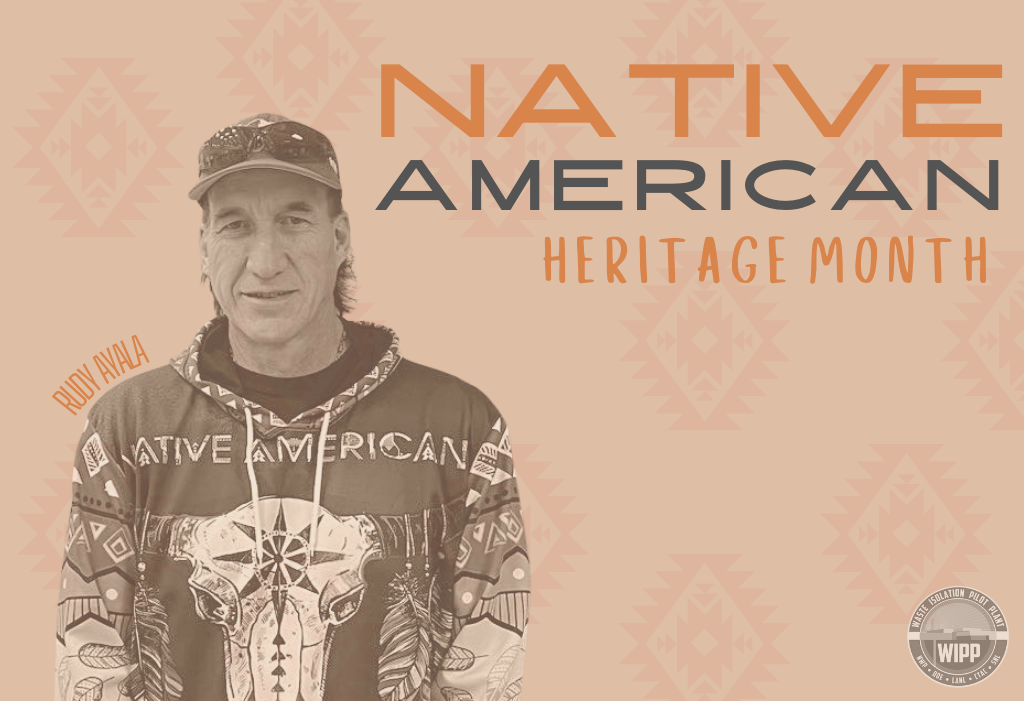 November is Native American Heritage Month or as it is commonly referred to, American Indian and Alaska Native Heritage Month. This month is a time to celebrate rich and diverse cultures, traditions, and histories and to acknowledge the important contributions of Native people.

We had the opportunity to speak with one of WIPP’s employees, Rudy Ayala, who is Northern Cheyenne and Pueblo. He has been with WIPP for eight years and is currently a Radiological Technician in the Environmental Safety and Health Department. Rudy has worked all over the country at various Department of Energy sites, including in Idaho, Washington, New York, Tennessee, and now New Mexico.

What does Native American Heritage Month mean to you?

I don’t really think about it. I’m just proud of my heritage and how far we’ve come in the last 400 years. I remember being “white washed,” which is being called “white” after having white paint thrown on you; kids are cruel. I remember being told to cut my long black hair in order for me to fit in with the others. I refused to conform, so I never cut it. In the 60s, there were times we were told to remove our jewelry and “tone down” the colors, and I couldn’t understand why. In the 70s, I remember trying to buy furniture and being told, “We don’t serve your kind here.” Another time, in the 80s, I was told to “Go back to the reservation where you came from!” despite the fact I was born in Denver, Colorado. In the late 80s and 90s, there was an increased awareness in society of the wrongs of prejudice and discrimination. From 2K to the present, I haven’t had too many issues, and we, Native Americans, became more and more accepted. With that being said, the employees and staff at WIPP are some of the nicest, most helpful, and kindest people I have had the pleasure to work with — whether they are salaried or hourly, underground or above ground.

How would you describe how your culture has influenced who you are today?

I guess my biggest influence would be my parents (rest their souls). They taught me to never see “color”; to always treat people with respect; to say “yes, sir,” “no, sir,” “yes, ma’am,” “no, ma’am”; and to say “thank you.” They taught me to be grateful for every day because the past is the past; tomorrow is not guaranteed, and today is the present, so open that present. Every day the Creator gives you is a blessing that He wants you to have because it can be taken away in an instant. So, be grateful. Be kind. Be hopeful. Be humble. The world (Mother Earth) doesn’t owe you anything, but you shouldn’t take Her for granted because She gives you everything. Respect Her.