Actions to Protect Workers, Public and the Environment

The February 14 radioactivity release was a watershed event for the Waste Isolation Pilot Plant (WIPP). It was the first accident of its kind in the 15-year operating history of the transuranic nuclear waste repository.

No workers were underground when the release occurred. There were 11 workers on the night shift at the time of the release and two additional employees entered the site in response to the accident.

These 13 workers later underwent analysis to determine if they inhaled or ingested radioactive material.

Extensive environmental monitoring, including air, water and soil testing, indicates radioactive levels are near background levels and of no consequence to people or the environment.

There are three bioassay methods used to determine if an individual has internal radioactive contamination and each serves a different function.

Whole body counts or chest counts measure radioactive contamination deep in the lungs. This is an excellent method for detecting Americium 241. Eighty-six whole body counts were completed as part of the monitoring of WIPP personnel with no positive results.

Two other types of analysis are used to measure radioactivity excreted from the body. A urine sample will show radioactive material that has been absorbed from the lungs into the bloodstream and been filtered from the blood by the kidneys.

A fecal sample measures radioactivity that is swallowed and moves through the digestive system, which can take up to 10 days.

In total, 140 urine and 31 fecal samples were analyzed. Initial testing resulted in one positive urine sample and 20 positive fecal samples--all at low levels. Follow-up testing results were below the detectable limits of the laboratory analysis, indicating that the radioactive isotopes were excreted from the body. As a result, no radiological dose is assigned to these workers.

Bioassay determines the kinds, quantities or concentrations, and, in some cases, the locations of radioactive material in the human body. This is accomplished by measuring radiation within the body by lung counting or by analyzing radioactive material urine or fecal samples. 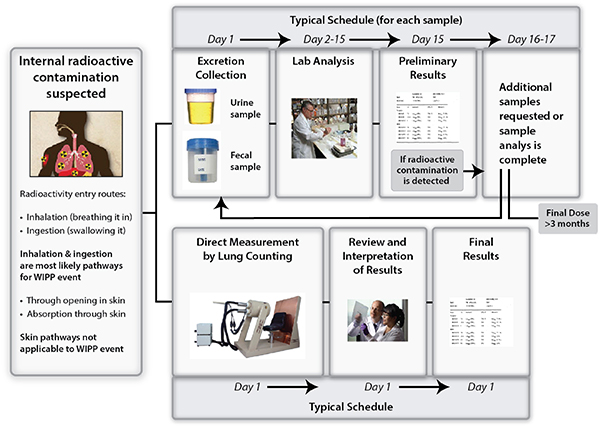 The Nuclear Waste Partnership (NWP), the management and operating contractor at WIPP, in the aftermath of two events in February has appointed four employees to the positions of WIPP Employee Health Care Advocates. The advocates are assisting employees with questions on their health.

NWP Senior Management has named the advocates in response to concerns that employees may feel uncomfortable coming to their manager with questions. Employees can now reach out to the advocates, who will bring employee concerns or questions to the NWP management team for resolution.

The average American gets about 1 millirem of radiation exposure every day from natural sources of radioactivity. Added to this is voluntary exposure from medical examinations and airline travel. For example, background radiation is 30 time higher at 30,000 feet than is at sea level due to exposure to cosmic rays from outer space. Radiation dose from medical procedures are typically much higher.

Another example is cigarette smoking.  Smoking one cigarette exposes the lungs to 1 millirem of radiation from natural isotopes of polonium and lead in the tobacco.

To date, radiation levels from the WIPP release have been below 4 millirem, or less exposure than a person receives from a chest x-ray. For more examples of dose comparison, please see the poster on millirem. 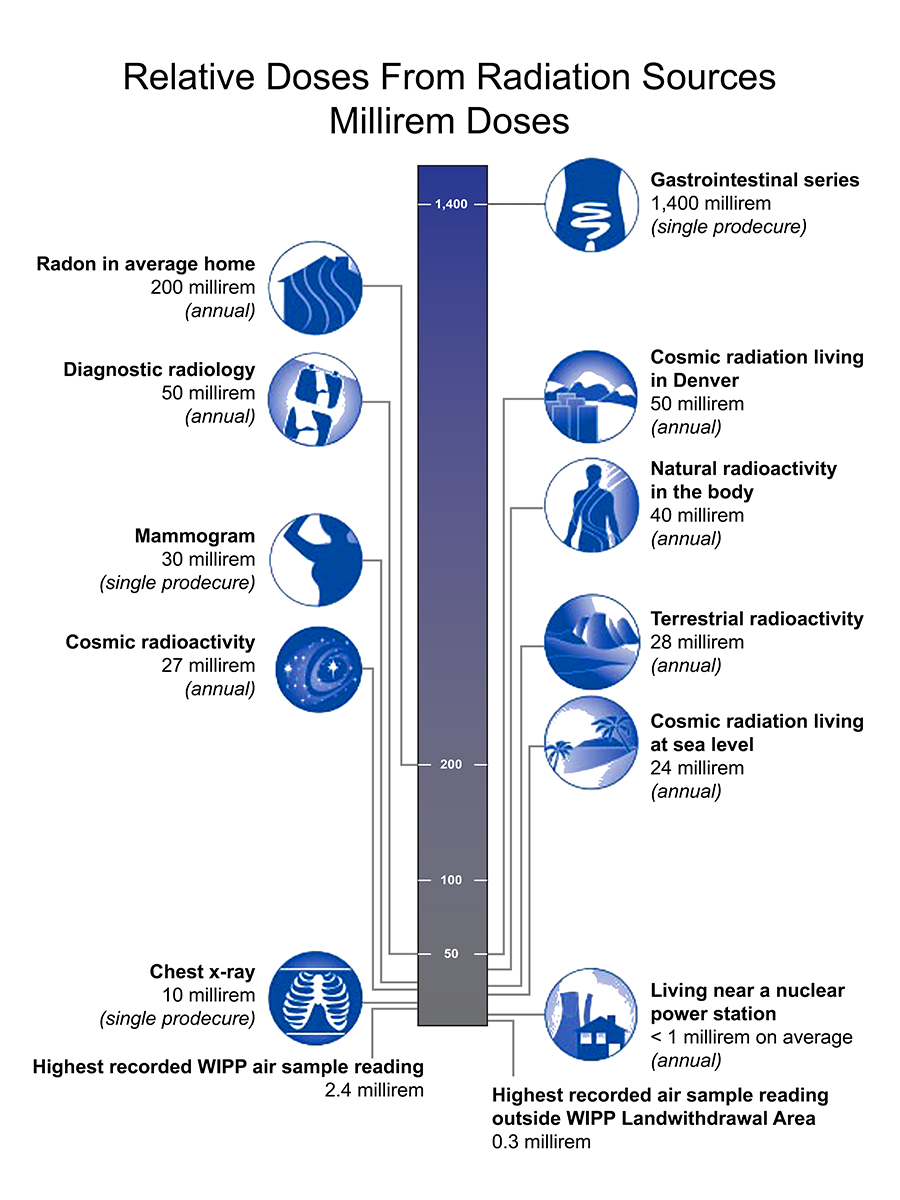 Continuous Air Monitors (CAMs) are used in nuclear facilities to measure and detect airborne radioactive particles. While most CAMs detect alpha and beta particles, some CAMs have additional capabilities to monitor for gamma radiation.

Particulates drawn through a CAM are deposited on filter paper. A detector built into the device continuously monitors the filter paper for any radioactivity. Depending on the concentration of radioactive particles detected, the CAM will initiate an alarm.

When personnel re-entered the mine, seven portable CAMs were deployed as additional protection for entrants. Additional air monitors will be added as needed.

Surface CAMs
Six CAMs, all located in the Waste Handling Building, were in place during the February 14 event. Since that time, seven additional CAMs have been added around the site to ensure site personnel are protected. Of particular interest is the CAM that was added to Station B to monitor air leaving the WIPP underground. This ensures that site personnel are warned if a radiological event occurs.