Announcement of a 60 Day Public Comment Period and Information Meeting

CARLSBAD, N.M. – Workers at the Waste Isolation Pilot Plant (WIPP) recently reached a key milestone six weeks early by completing the foundation for a building critical to the Safety Significant Confinement Ventilation System (SSCVS), which will be the largest containment fan system among DOE facilities when finished.

“I am very proud of the commitment by The Industrial Company (TIC) to ramp up construction of the SSCVS while remaining focused on safety, regulatory compliance, and environmental protection,” Carlsbad Field Office Federal Project Director Janelle Armijo said. “Successful completion of this project will be a critical step in improving air quality in the underground, preparing for WIPP’s future.”

TIC plans to celebrate with a barbecue for its employees and the SSCVS project team because TIC workers marked 100,000 work hours without a lost-time accident. 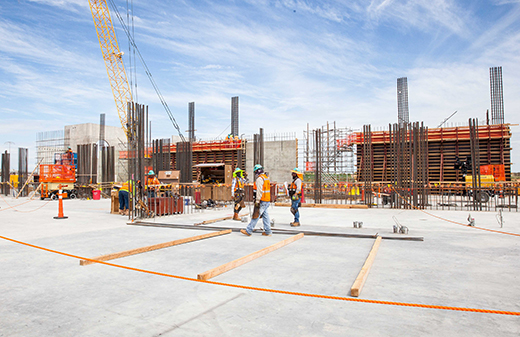 The NFB, whose footprint totals 55,000 square feet, is one of two major buildings that make up the SSCVS. The nearly 25,000-square-foot Salt Reduction Building will take salt-laden exhausted air from the WIPP underground and, using filters and water misters, prefilter it before sending the air to the NFB. Four 1,000-horsepower fans pull the air through switchable high-efficiency particulate air (HEPA) filter units in the NFB before exhausting the air out a 125-foot-high stack.

Key to restoring full operations at WIPP, the SSCVS is the largest construction project at the site in close to 30 years.

The system will provide a modern air supply system designed to run continuously in unfiltered or HEPA filtration mode. The system will supply 540,000 cubic feet per minute (cfm) of air to the underground, significantly more than the maximum 170,000 cfm provided by the current ventilation system.

WIPP’s fifth shaft to the underground, the 2,275-foot utility shaft, is also under construction. When complete, it will be the site’s largest with a 26-foot finished diameter providing additional airflow to the underground in conjunction with the SSCVS.

WIPP is designed to safely isolate defense-related transuranic waste from people and the environment. Waste temporarily stored at DOE sites around the country is shipped to WIPP and permanently disposed in rooms mined out of an ancient salt formation 2,150 feet below the surface. WIPP, which began waste disposal operations in 1999, is located 26 miles outside of Carlsbad.